Shark Coloring Pages: Fishes We Wishes Not to Swim With! 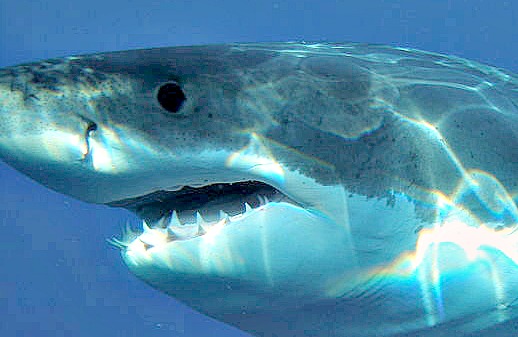 Join me for a bite?

Shark coloring pages contains ferocious eaters and disinterested feeders.  Not all sharks see us as a meal.

Ok, sometimes they nibble on us (ask my nephew).  Or mistakenly take a bite like a great white.

But most avoid us.  So there's no need to view them as fishes we wishes would go away.

Just don't cover yourself in meat or splash too much.  That way all those sharks swimming with you (believe me, they're there!) won't bother you!

The following fishes are not to be feared.  Take control and color them. 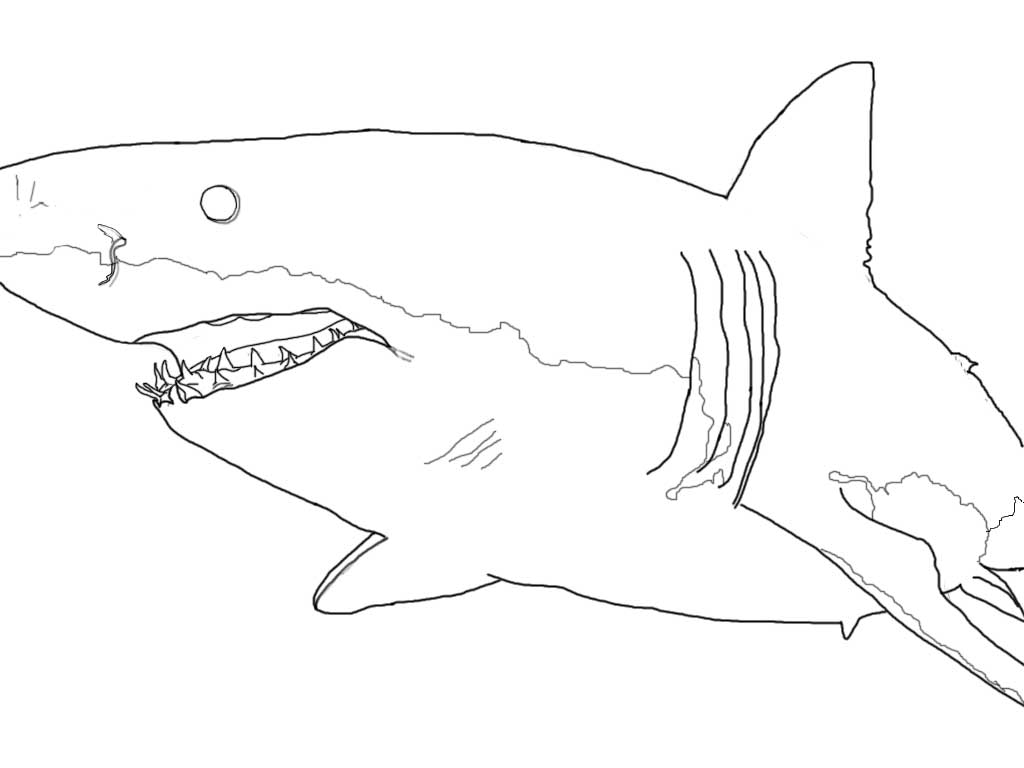 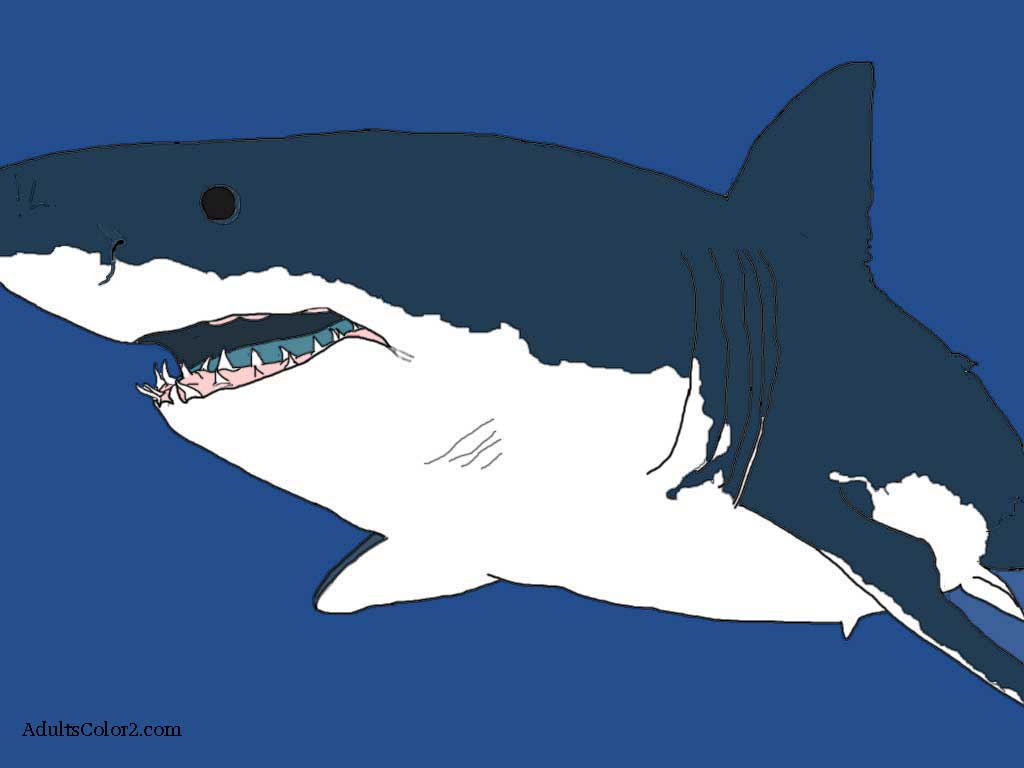 This is the critter nightmares are made of!  Fortunately, attacks on humans are rare.

But how disturbing is it to realize that these gals cruise the sea with you and me?  Incredibly disturbing!

I mean the great white can take a large bite out of you.  That's an unnerving thought.  One best left on dry land!

But this one can't hurt you!  Master your fear.  Create a masterpiece. Or should I say monsterpiece?

Naw, no monster, this gal just lives to eat like me! ;)  Hmm, wonder if she likes chocolate? 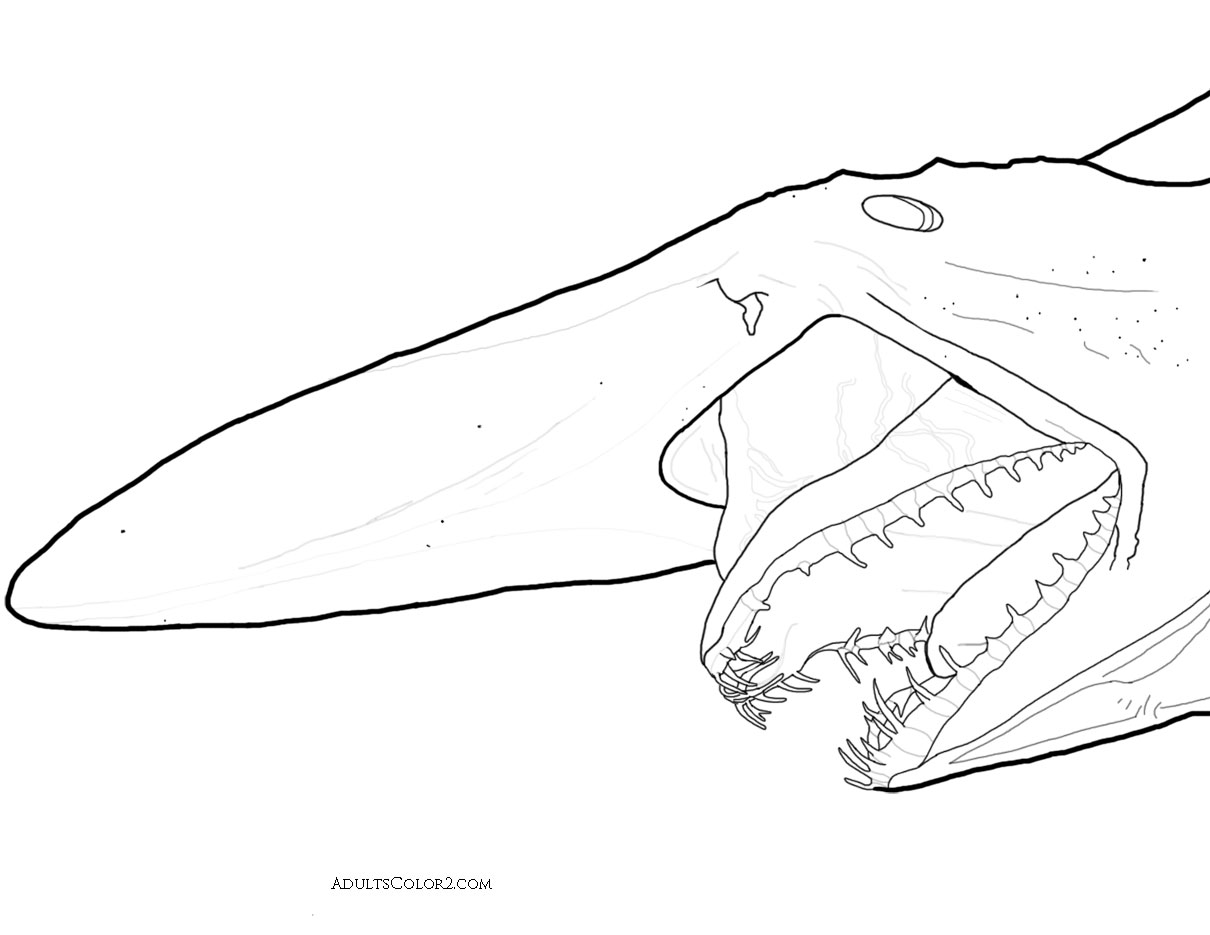 Wow, that guy sure made an impression on that diver.  Thanks to those guys for capturing that creepy goblin at its creepiest!

His jaw in action is a sight you probably won't soon forget. 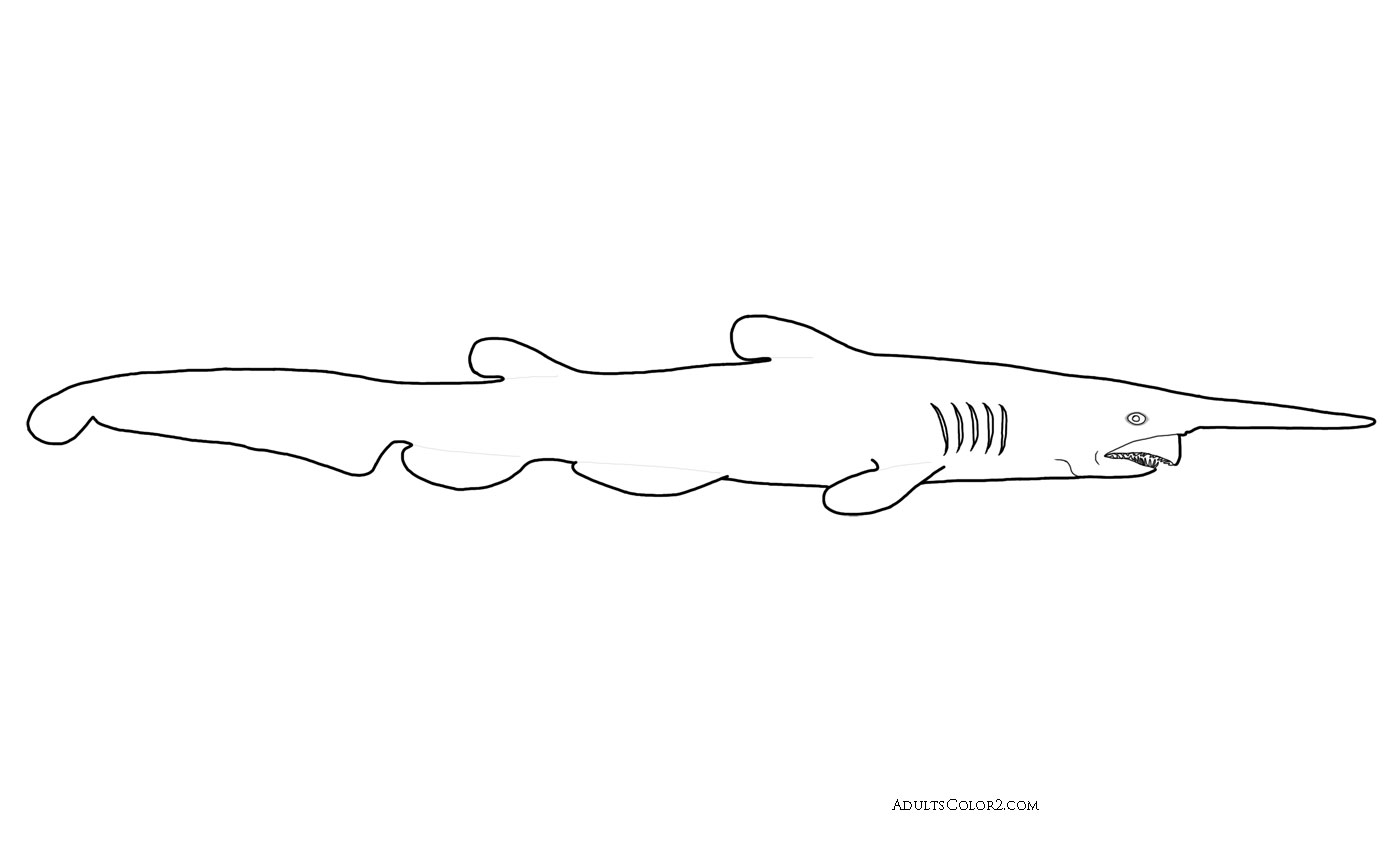 Here's a drawing of the entire creature.  If you are interested in your own copy, you will need legal size paper (8.5 inches x 14 inches).  It was too long to squeeze onto a regular sheet of paper.  :(

This shark isn't considered aggressive.  But the blacktip likes to swim in shallow water. 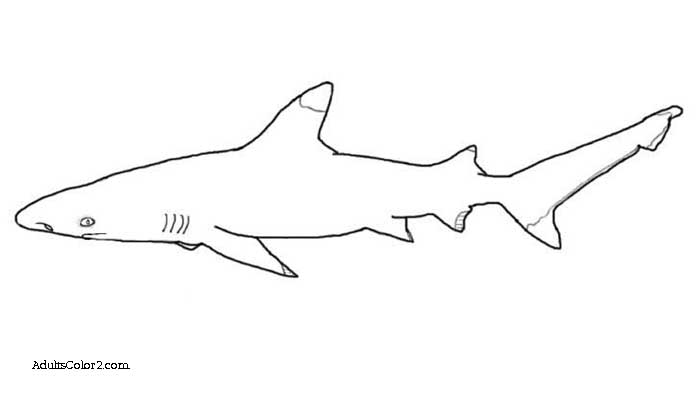 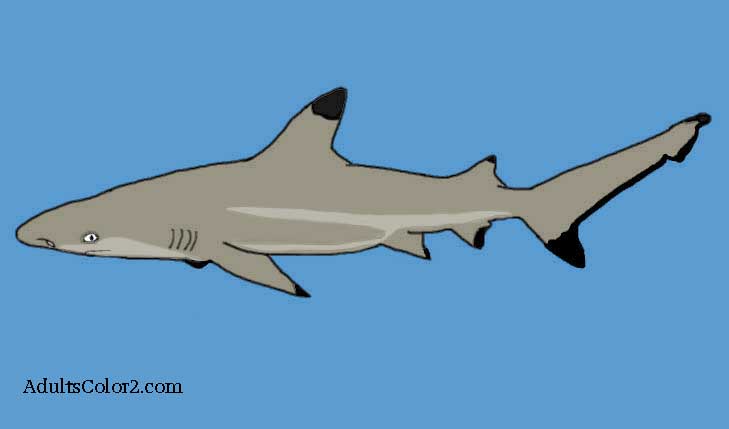 So it has been known to nibble on the digits of people wadding near the shore.  Not to worry, no damage was done to said digits! 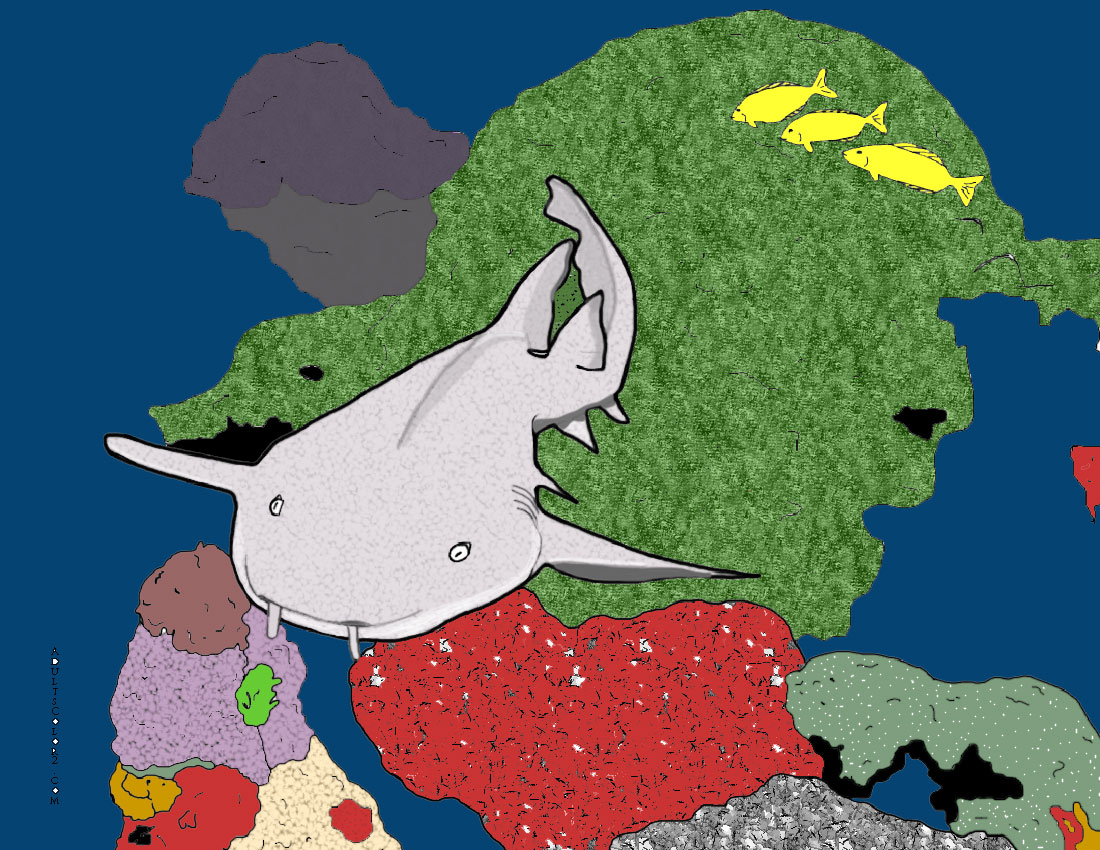 Seems this shark lazies around during the daytime.  It prefers to hoover up a small meal in the shallows at night.

So you probably won't have a problem with this guy.   BUT they have been known to bite people who molest them.

Bored at night?  Stay home and do this nurse shark coloring page instead of swimming!  ;)

Feeling lucky?  Want to swim out from shore a bit more?  Or maybe not...

Cause if you do, you might just encounter her! This fast, intelligent and deadly predator has been know to attack people. But doesn't appear to consider us a meal. 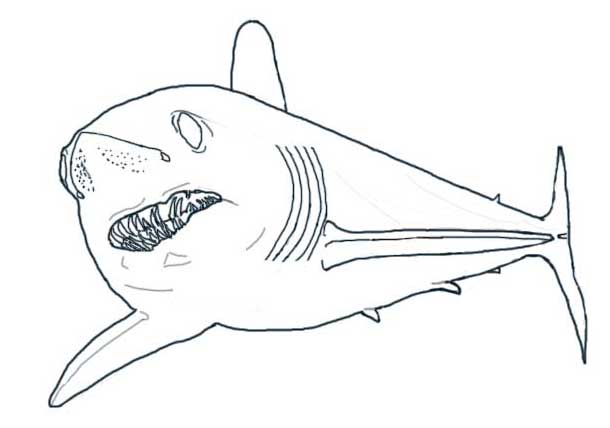 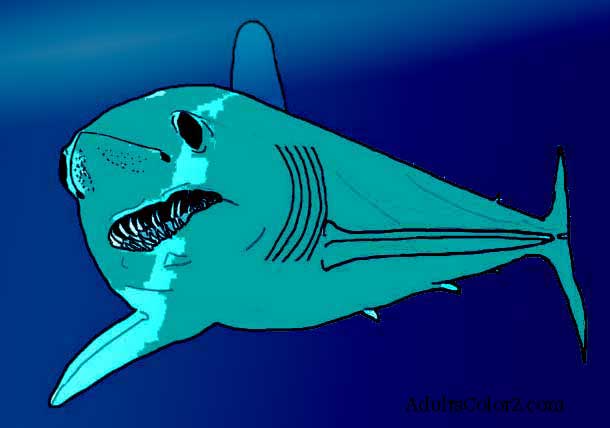 However, humans consider the mako's flesh to be a treat.  Not me, do you?

Maybe you'd like to treat yourself to a coloring page instead?

Only thing scary about this shark is it's size.  Fortunately, this guy just swims along filtering tons of water for tiny life forms. 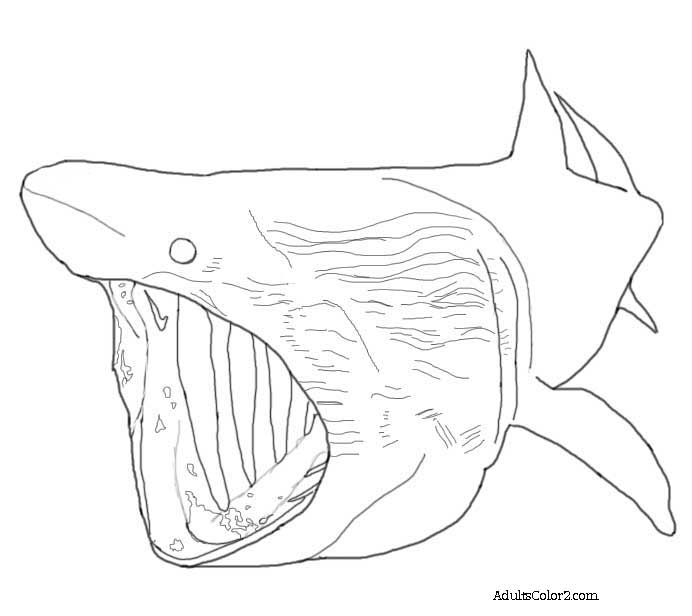 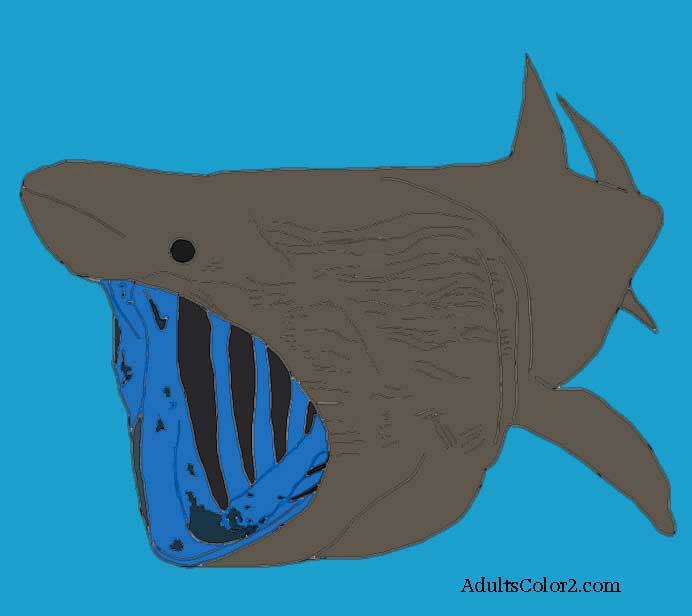 The beaches would be bare if the basking shark was a predator!  Who would risk a dip?

Sadly, they're a bit too easy going for their own good.  The number of truly huge one's has decreased.

I would love to pull up next to one in my boat, I think.  Or maybe I would be too intimidated by a fish longer than my boat!  ;)  Idk? 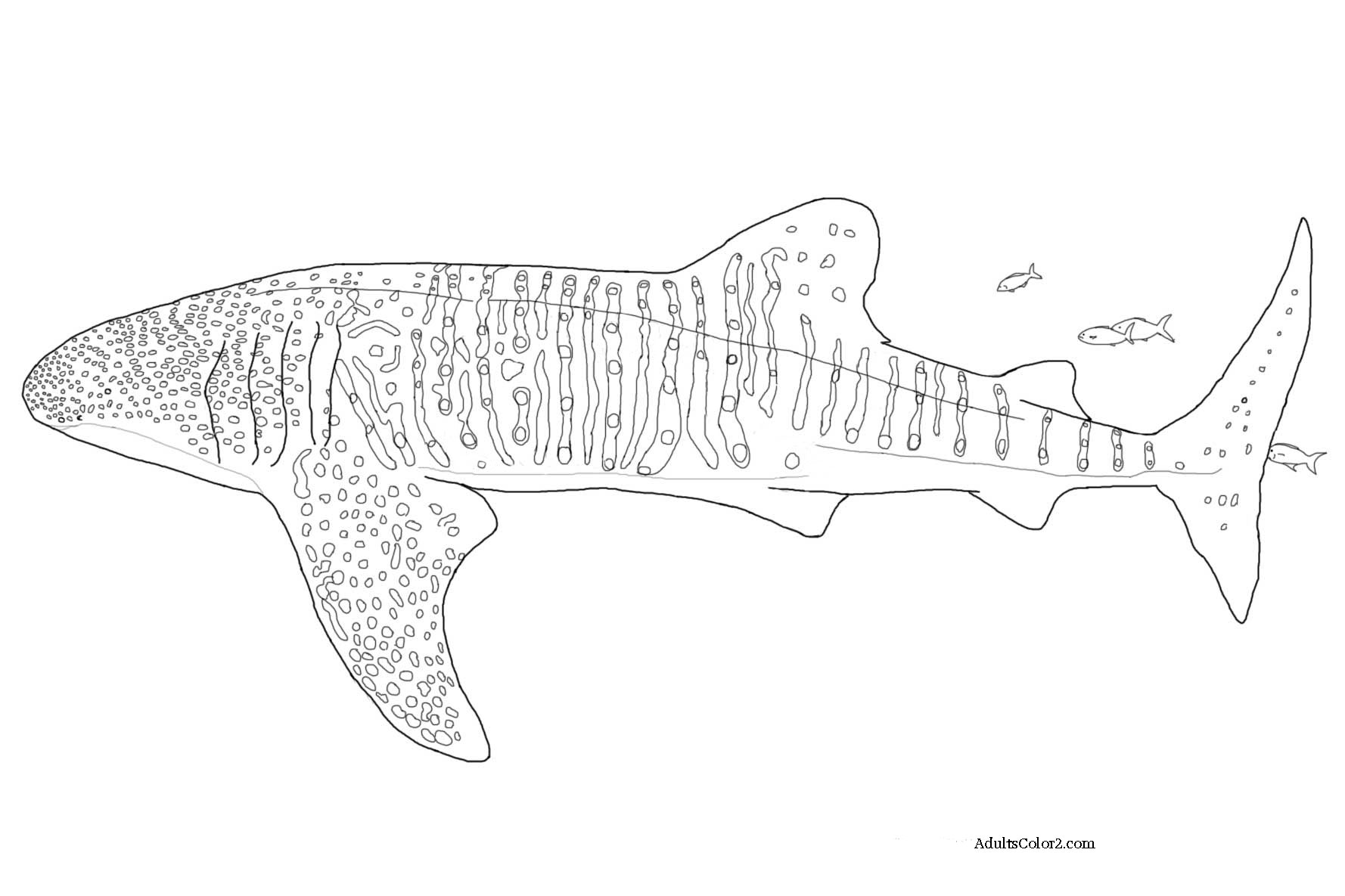 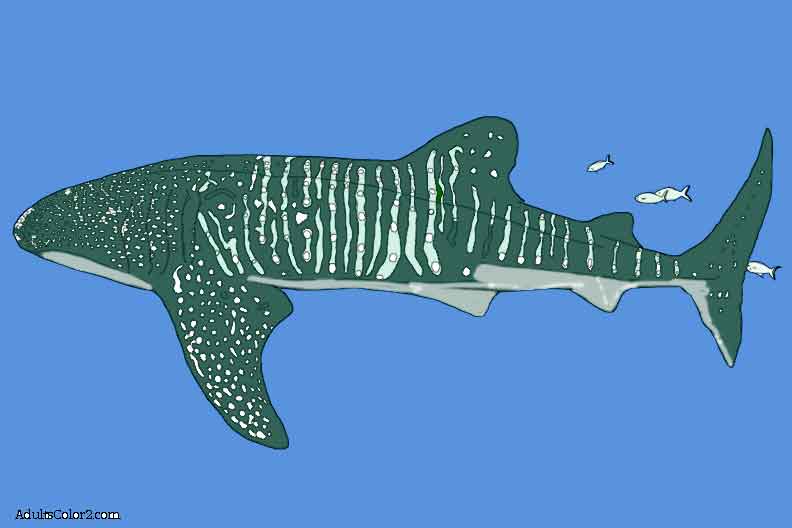 Thankfully this whale of a shark is also a gentle filter feeder!  Whew! These guys can grow to over 40 feet long and live to about age 70.

Imagine if it were a predator?

Seems they're not afraid of divers.  Youngsters have been seen playing with humans! 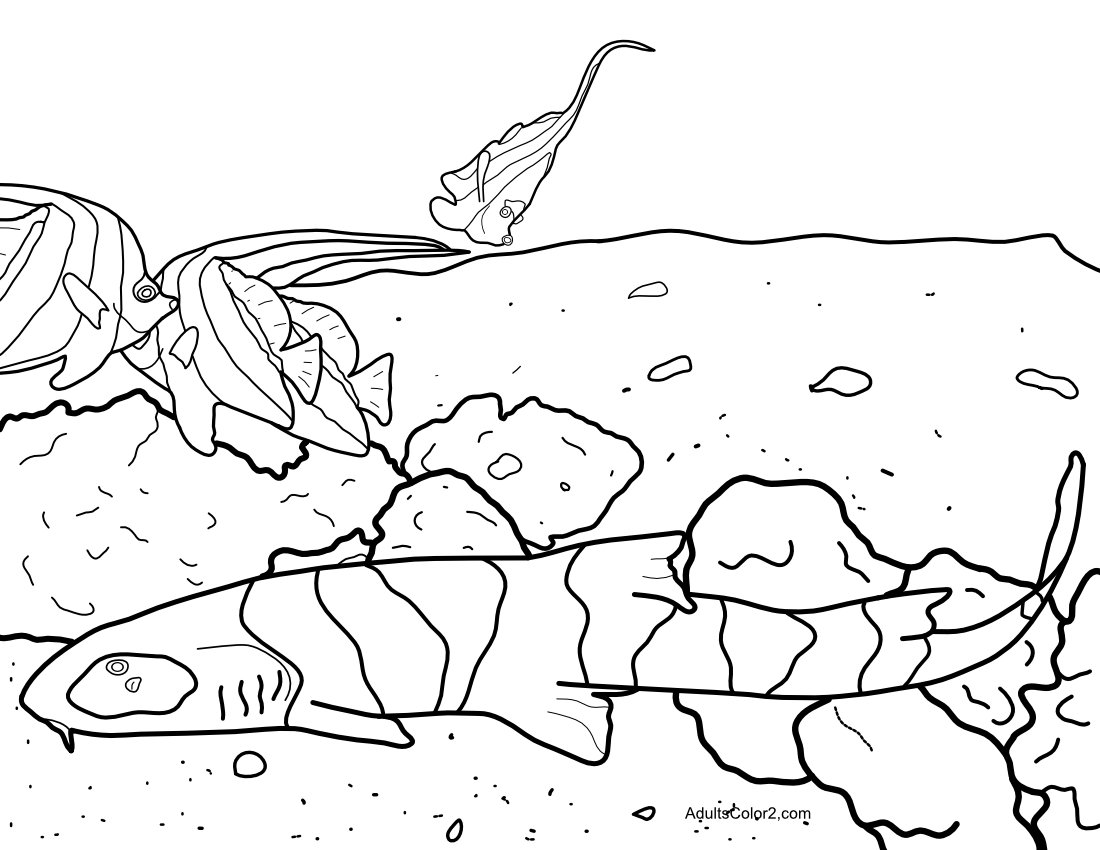 The bamboo shark is harmless, small shark you could have in your own aquarium!

Or you might get to put your hands on one in a touch tank.  That alone should make a trip to your local aquarium worth it! 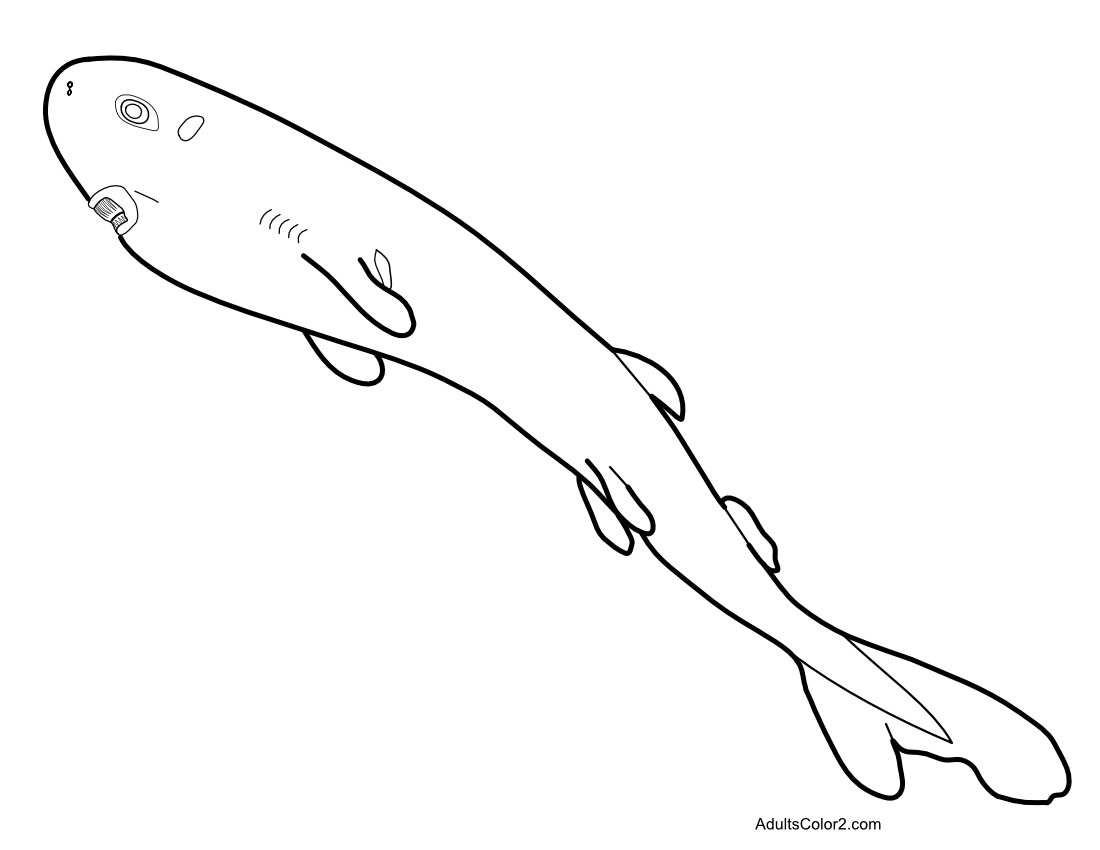 The pocket shark lives in deep water.  It gets its name from the structure behind its front fin.  Some scientists think the large pocket may contain pheromones or a glowing liquid.  I'm hoping it's the glowing goo! 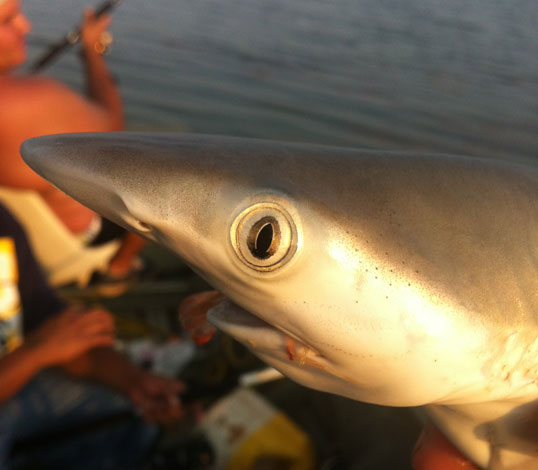 My son sent me this  right after landing this terrifying beast.

I decided to turn it into an adult coloring picture.

I was impressed with his catch until I saw this picture... 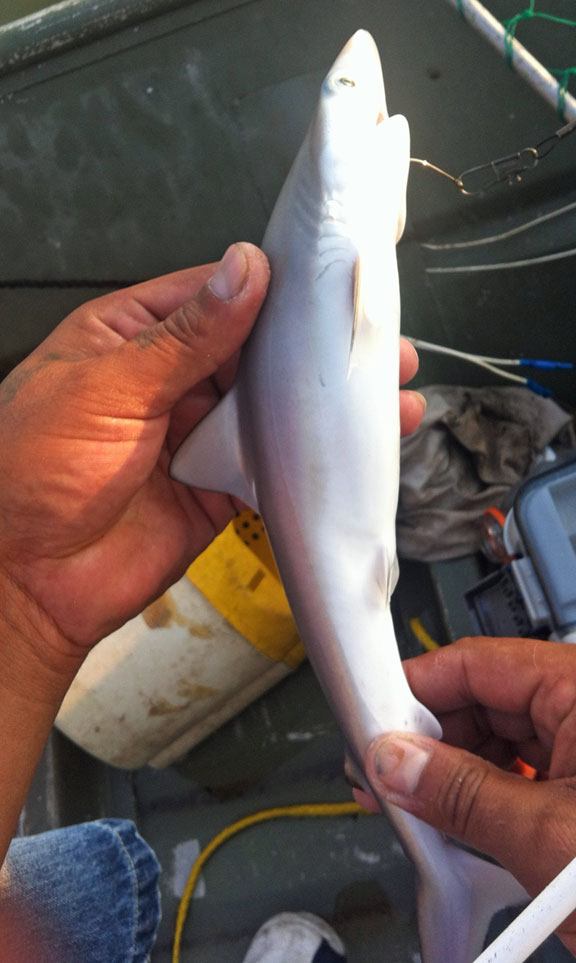 Uh, turns out the beast was just slightly smaller than I first thought.  About 5 feet smaller!!!

But it's still a shark, right?  A future fearsome predator?  Only if he's a fast swimmer so he can avoid being dinner!

How to Get Your Free Printable Coloring Page

Ready to color?    Left click on a coloring page and drag it to paint3d or similar.  Color then print .   OR...

Click on the black and white drawing. You'll need a pdf reader to open the coloring page.  Look for the printer icon on the right side(top) of the page. Click on the icon.

Don't have a pdf reader?  Get one free by clicking on the Adobe Acrobat link below.

And now for the good news, fish lovers!  No sharks were harmed in the making of these shark coloring pages.  And no swimmers/visitors were snacked upon!