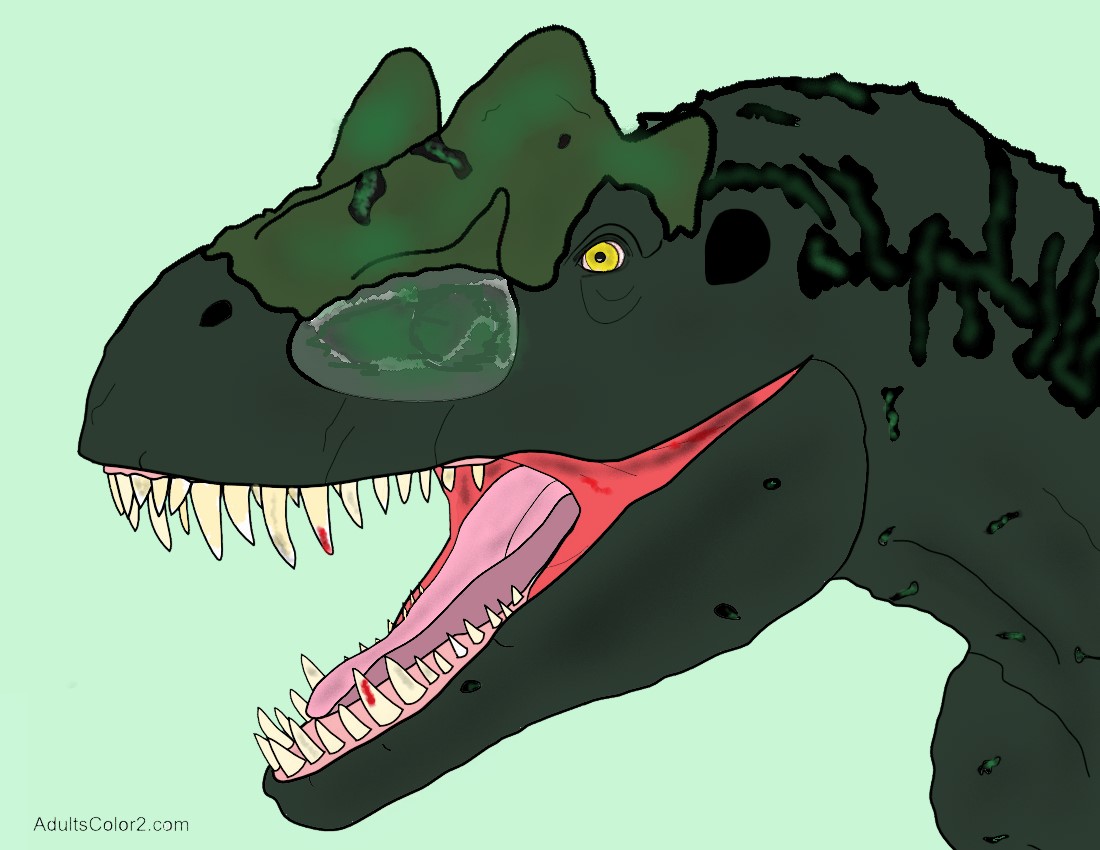 Come sink your teeth into dinosaur coloring pages!  You can find some of your favorite dinos here to color.

Dinosaurs like the tyrannosaurus, allosaurus, archaeopteryx, velociraptor and more.  You'll see lots of big teeth and claws.  But don't fear there are some plant eaters here. 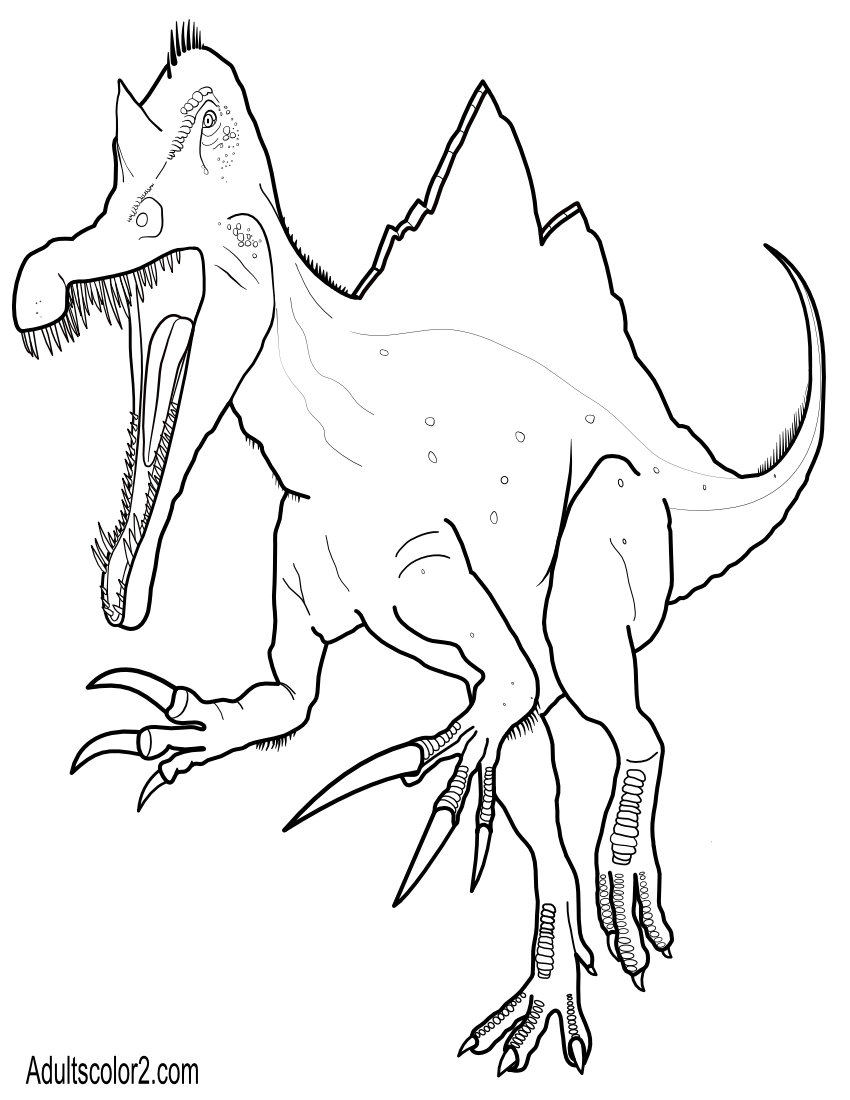 The first fossil up for your coloring pleasure is the ferocious spinosaurus.  He's the complete package!

Big teeth, big claws, spines and a horn.  Glad he's made of paper not flesh! 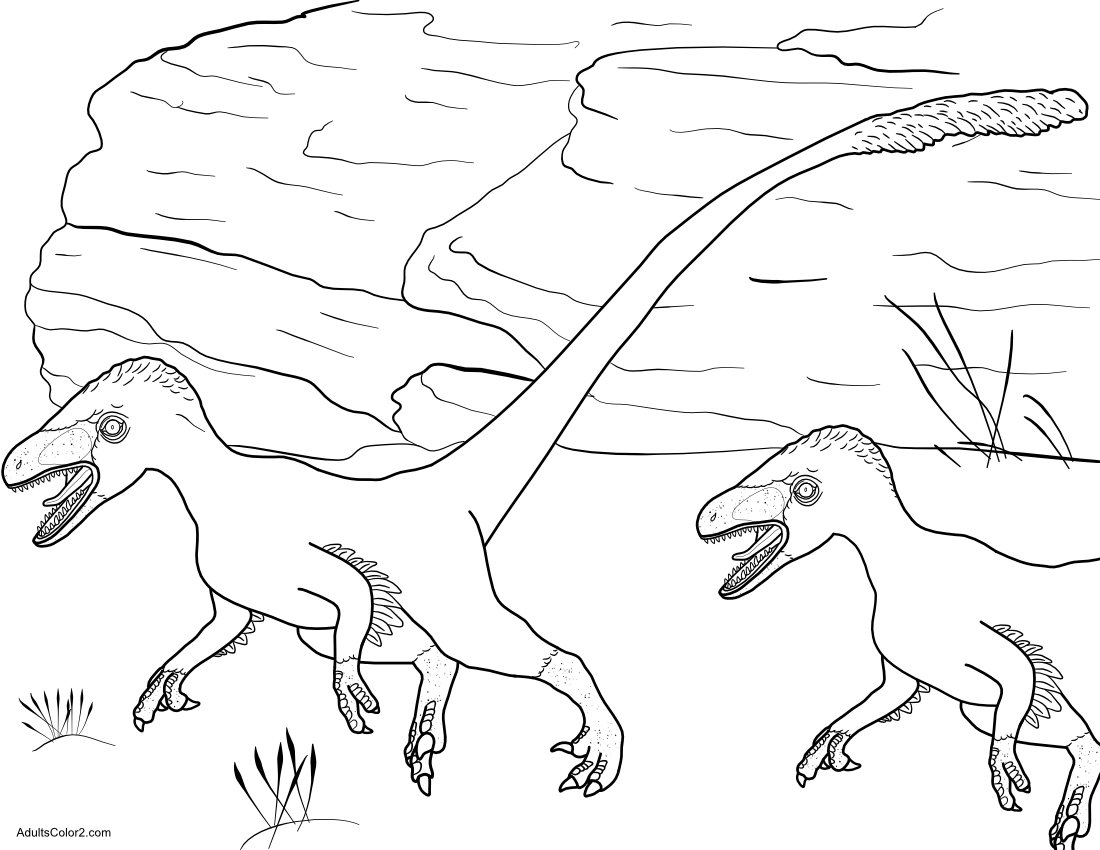 Here's a couple of velociraptors going out for some fast food.  How would you like to be on their menu?  Yikes!

Imagine these guys on the prowl the next time you're visiting the arid west.  The Arizona dessert would be a deathert! 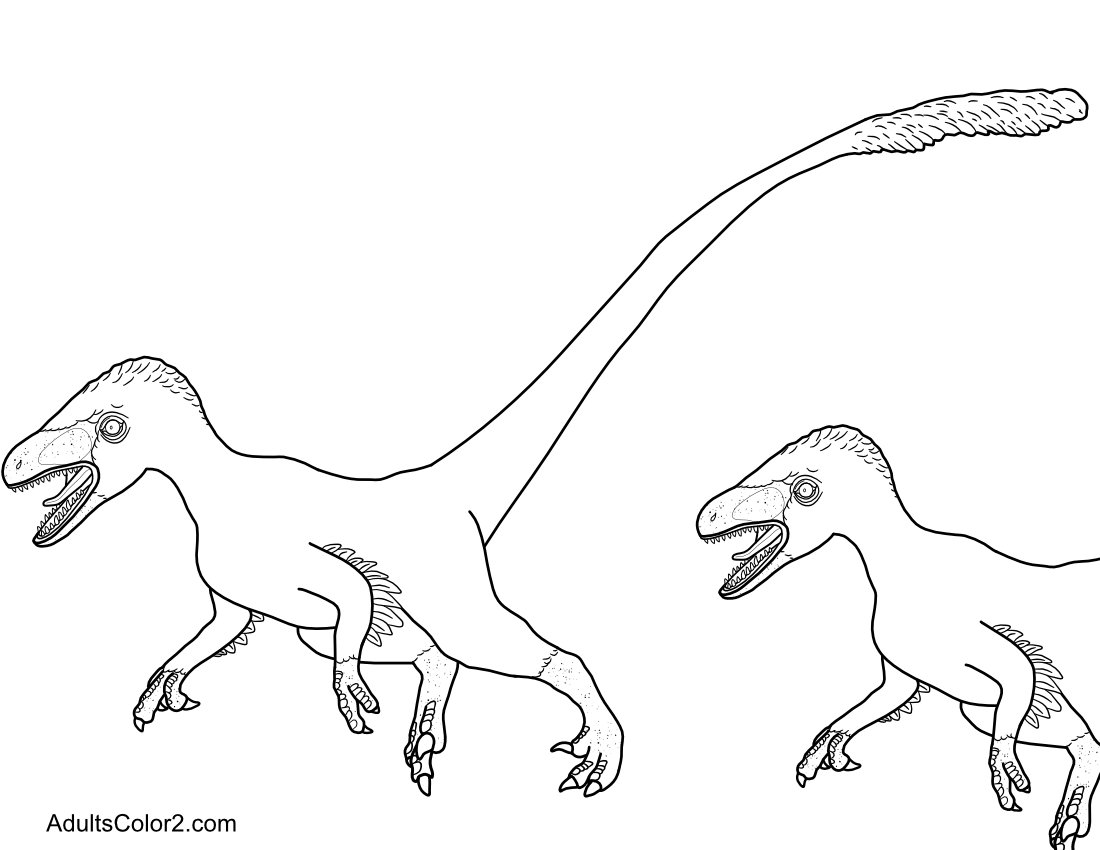 You can draw in your own background.

Yes, that's the fine fellow at the top of the page.  Now you can color the allosaurus anyway you like.  Watch the teeth, they look a little sharp! 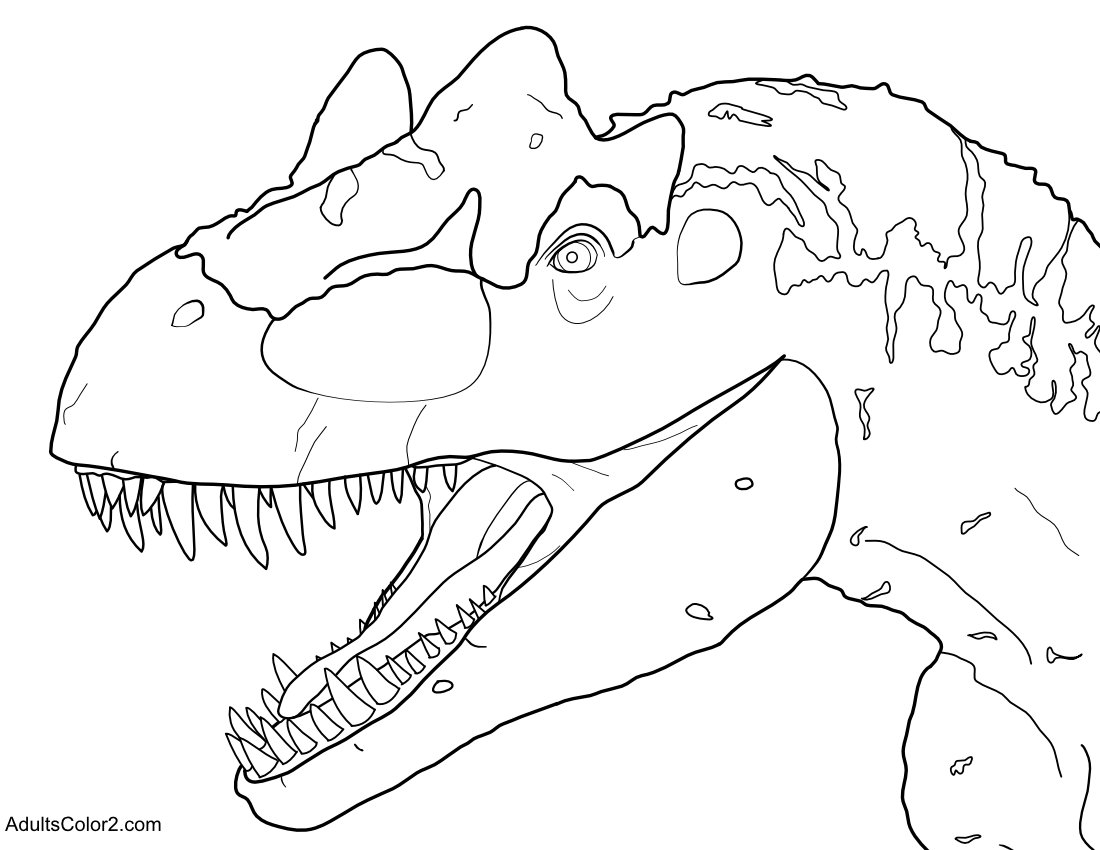 This feathered fiend looked like a bird but packed a dino bite!  Wonder how he would have tasted fried?   Sadly, we'll never know. 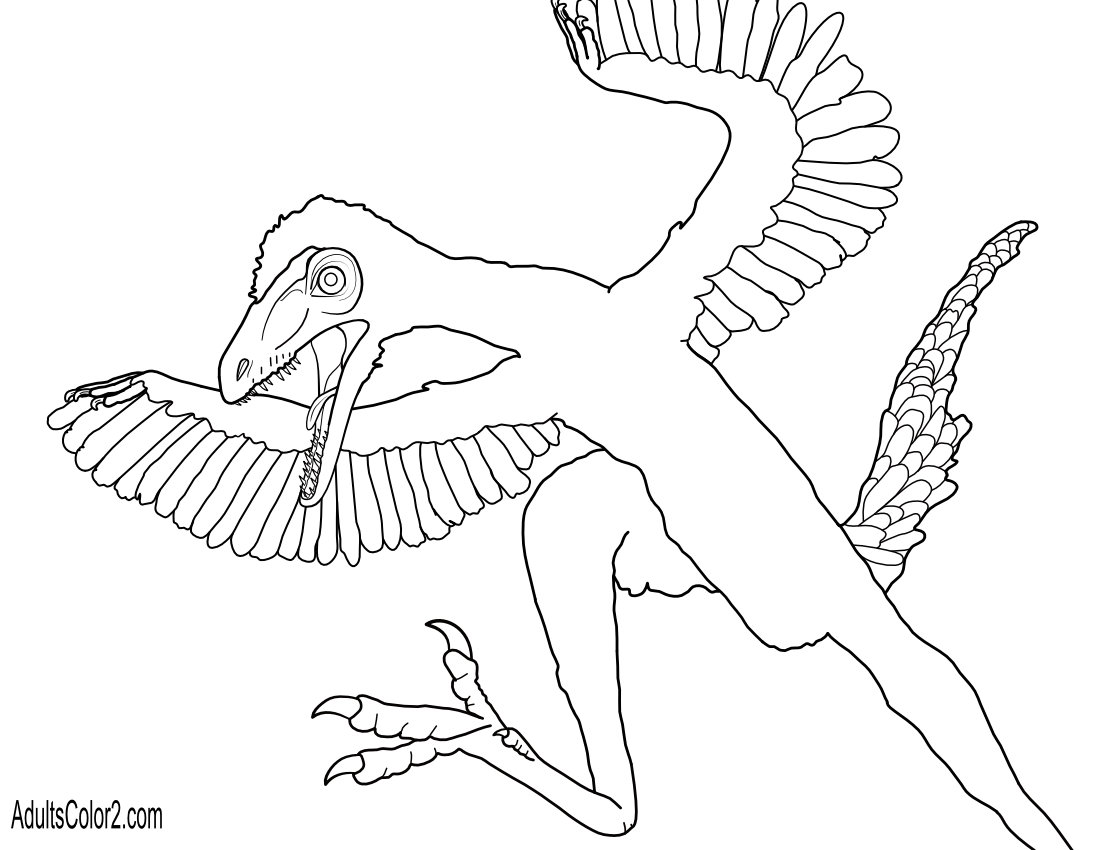 Here's your chance to color him. 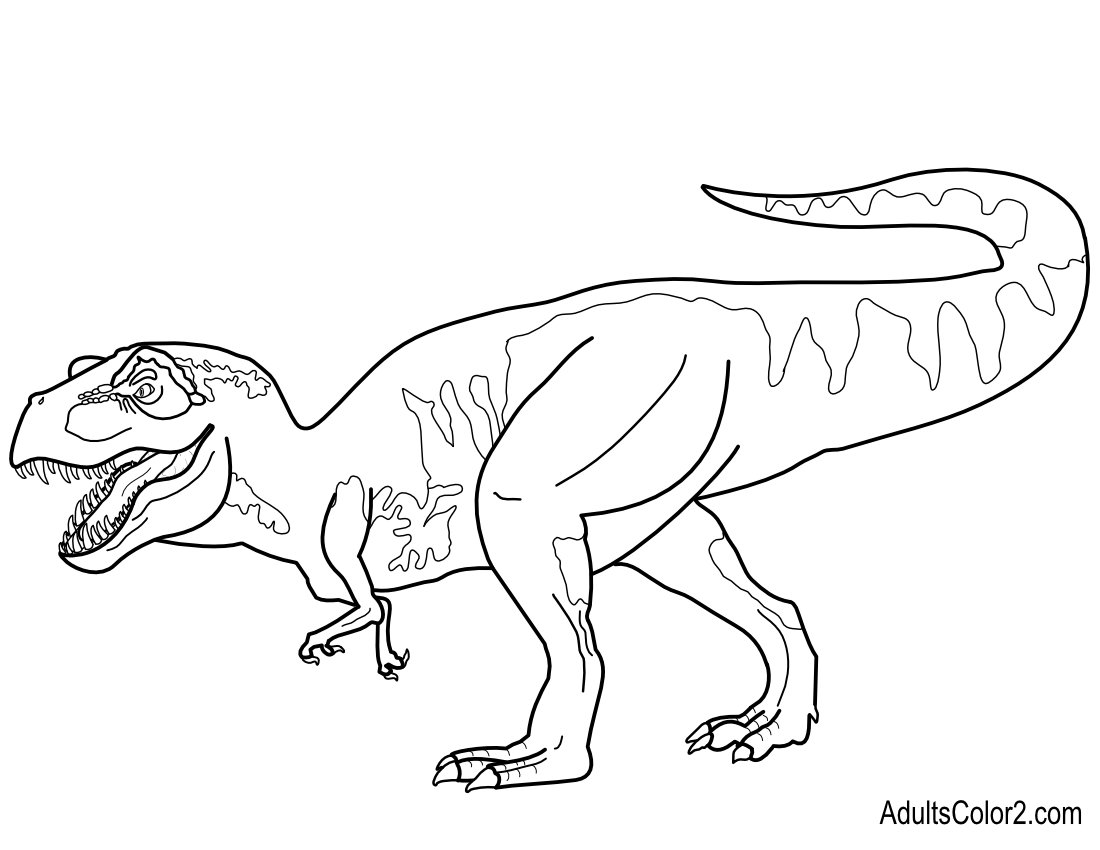 Ceratosaurus means horn lizard according to Wikipedia.  See the horn on his head?

Looks kinda silly doesn't he?  Dragging his tail like that!  That's the old school way of depicting dinos like him and t-rex.

Research and scientific debate changed the way these dinos are drawn.  Now these guys are shown standing in a t-rex like posture.  Sure makes them look more ferocious and less comical! 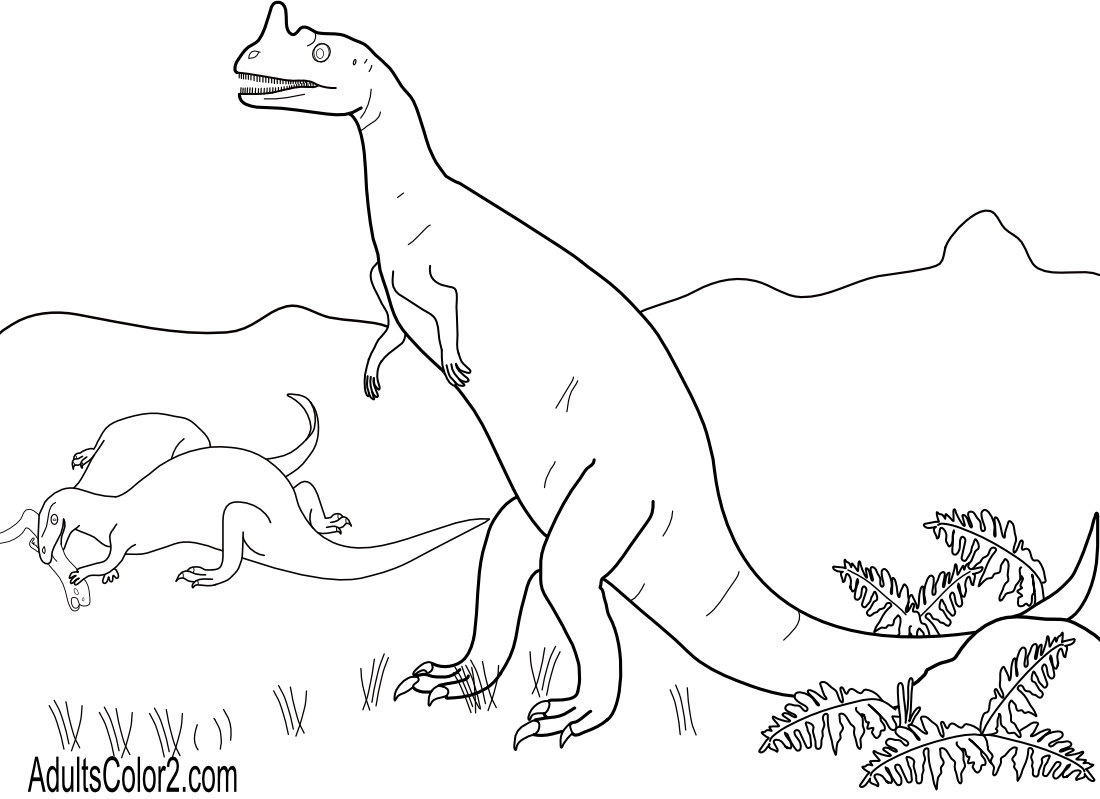 The stegosaurus looks pretty friendly, right?  Till you look at that tail.  I don't suggest you try to pet him!  Color him, sure!  But don't try to approach. 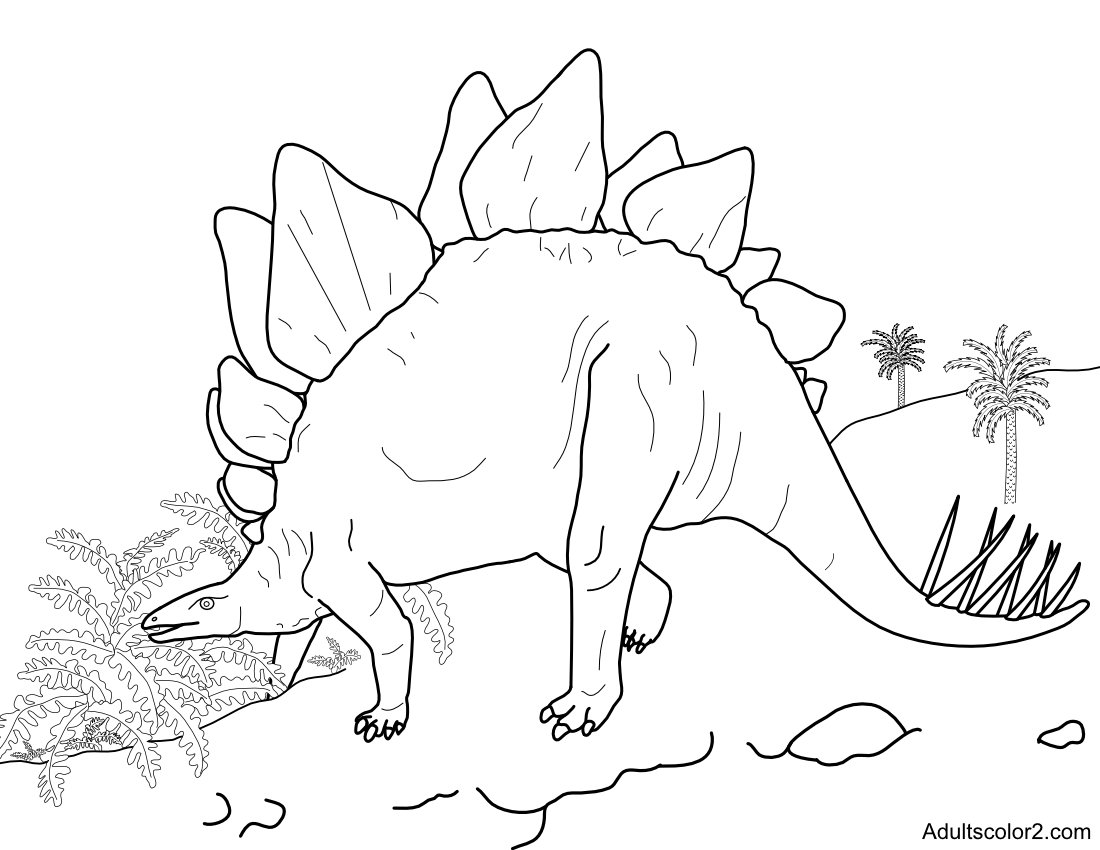 Here's a couple of plant eaters that might be friendly.   What do you think?  I think those horns are a sign to stay away! 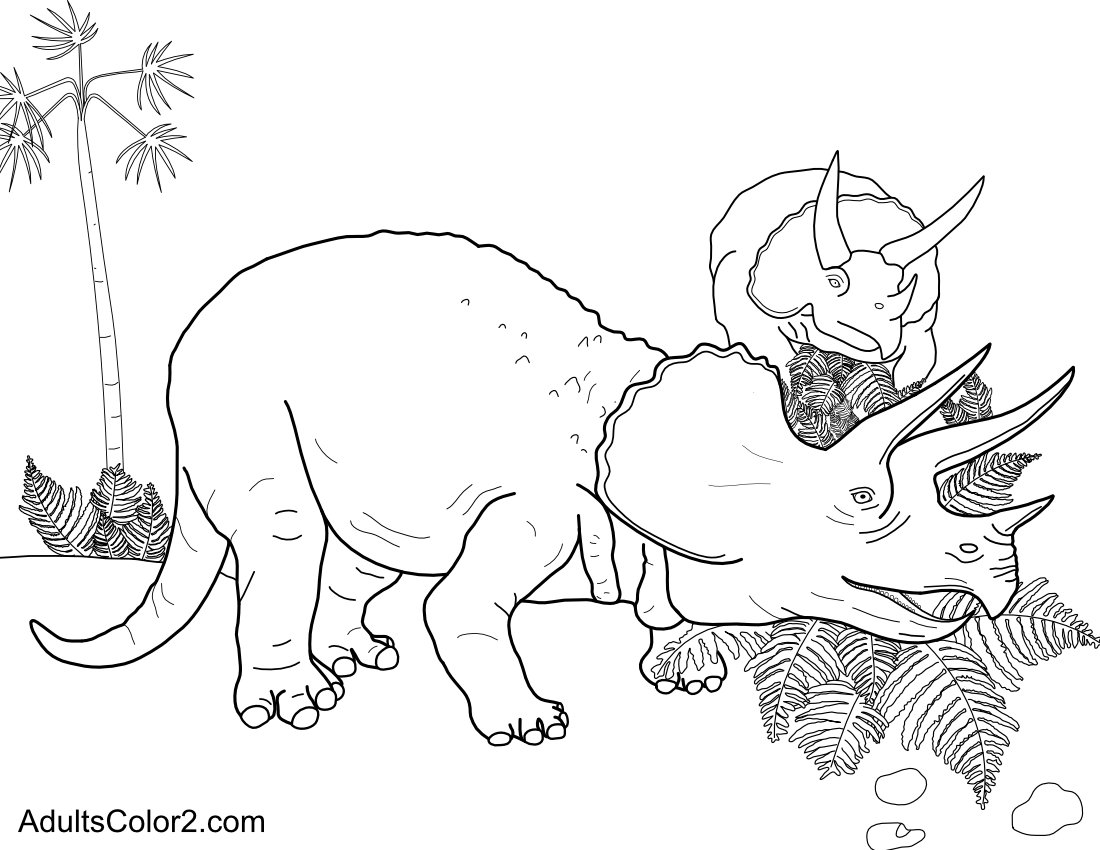 Here's an inquisitive looking fellow.  Maybe he needs his neck scratched?  You go right ahead, I'll wait over here!

That's a cool crest on his head.  That crest is just calling out for some one to color it!  Shouldn't you answer the call? 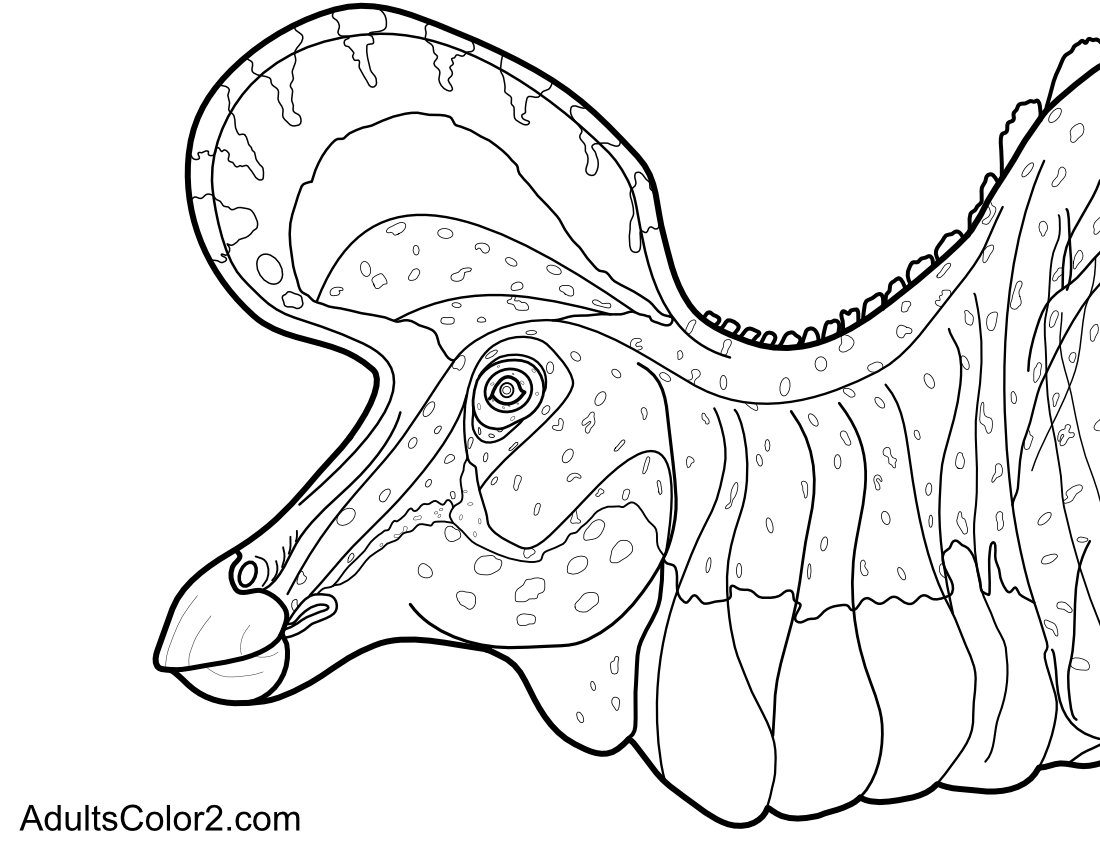 You may remember this guy's big sneeze in Jurassic Park.  The good news is there's no need to pack a super-sized kleenex.

The bad news?    According to aminoapps.com, if this guy had sneezed his head might have blown off!  The site claims the pressure from a sneeze would have been too much for him to bear.

So fear not the snot!  It's safe to color him. 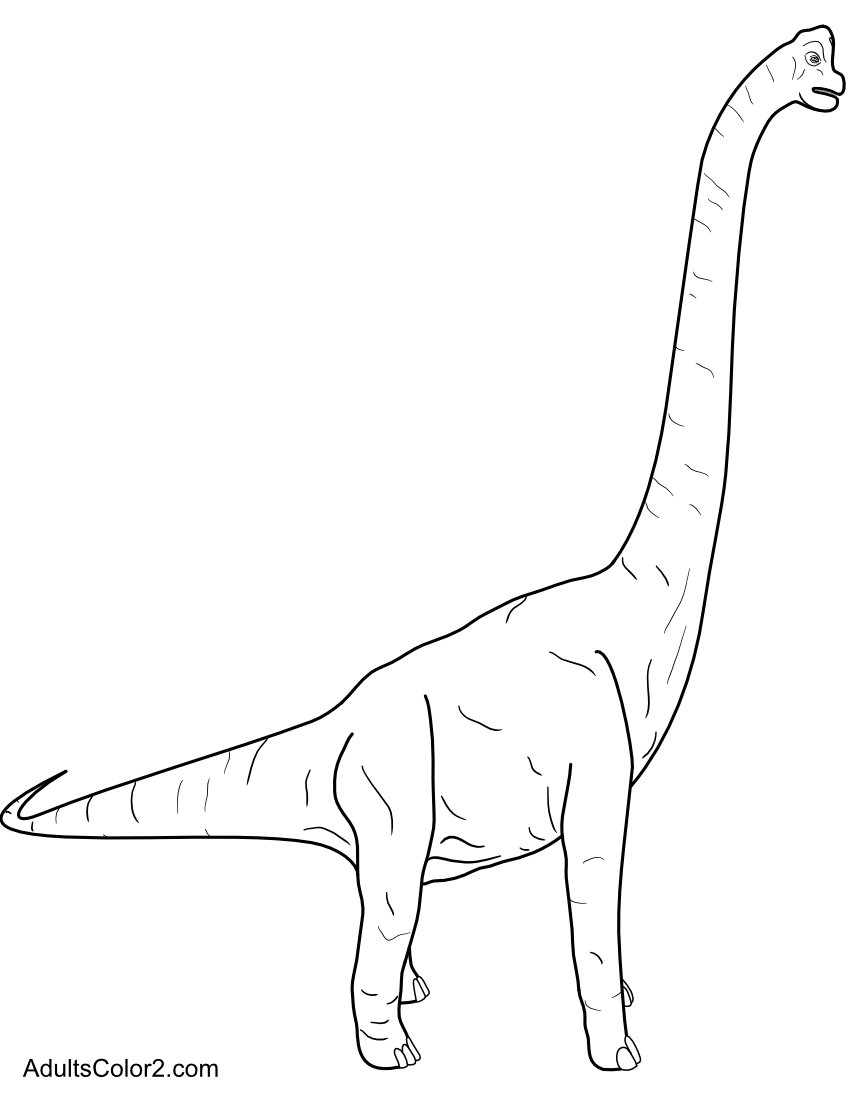 Yep, he's a mosasaur like that gigantic swimming beast in Jurassic World: Fallen Kingdom.  Sure looks like a dinosaur but he was just a ferocious reptile.

These guys would sure spoil a day at the beach! 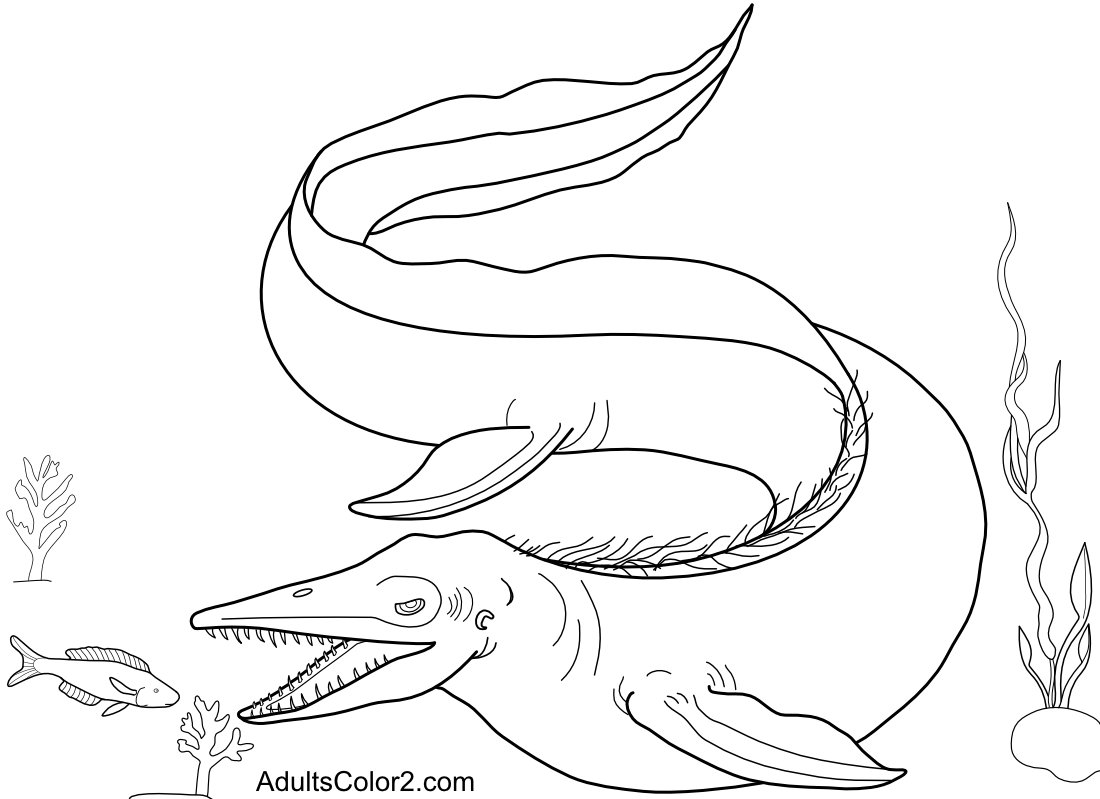 Giant flying reptile that hung out in the world of dinosaurs.  Awesome, yes, dino, no.  Still worthy of a place in the dinosaur coloring pages. 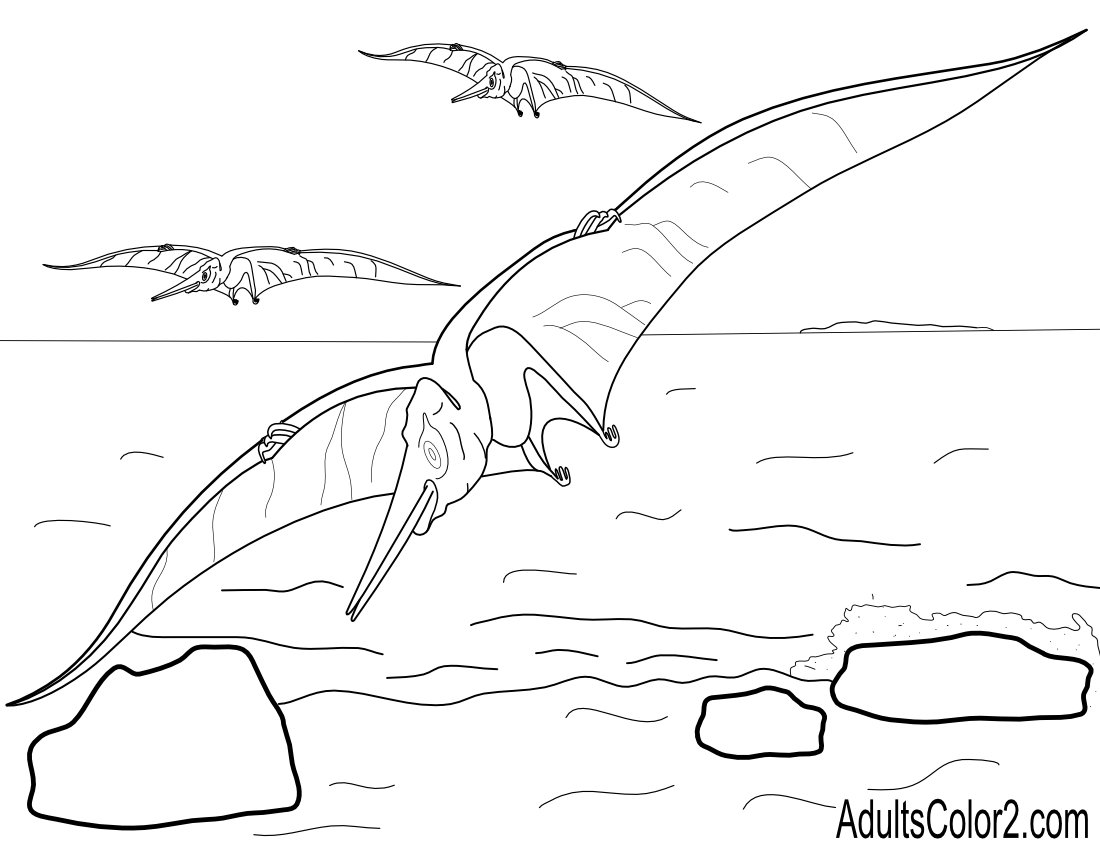 NOT a Dinosaur or a Reptile

This is a naosaurus.  A what you say?  He's related to dimetrodon.   Perhaps that name rings a bell?

Looks like a dino doesn't he?  Or maybe a reptile?  Yes, he looks like both but is related to neither!  Huh???

He's a closer relative to us than to any reptile that's ever existed!  (Source: https://evolution-outreach.biomedcentral.com)

He's here because he's an awesome looking creature who looks like a dino but ain't! 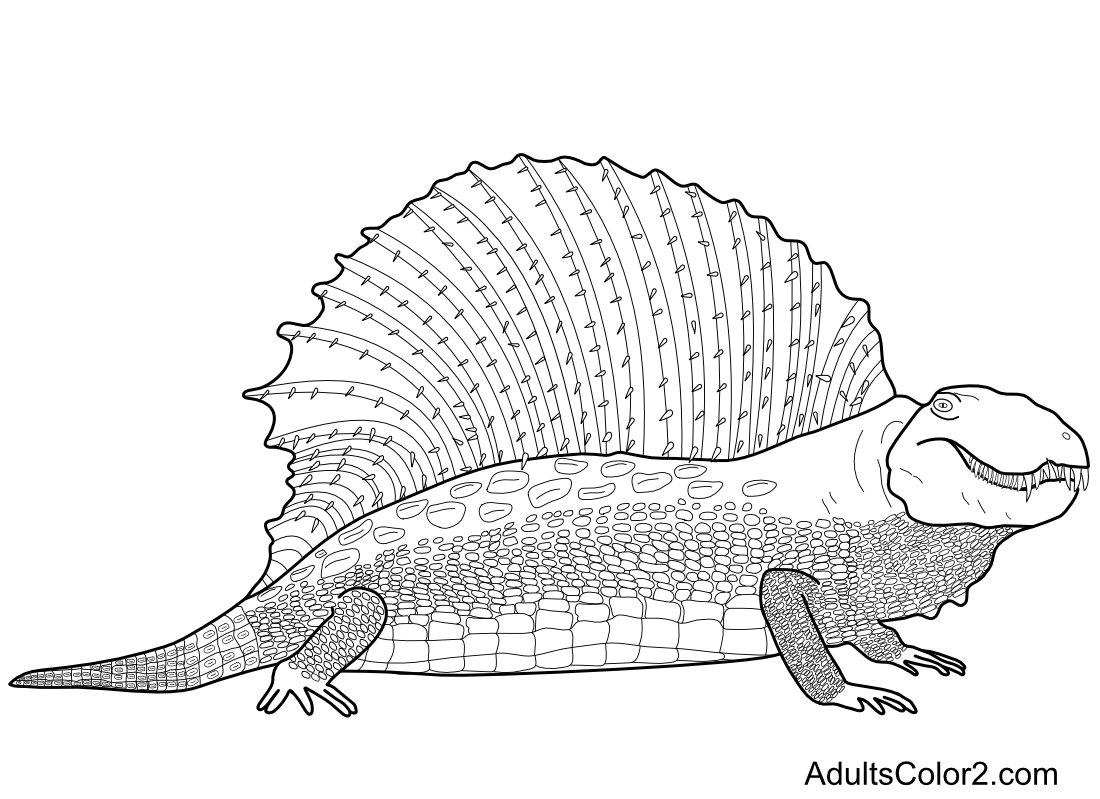 That's the last of my dino pages, for now.  But unlike these fantastic beasts, I'll be back with more till I go extinct!